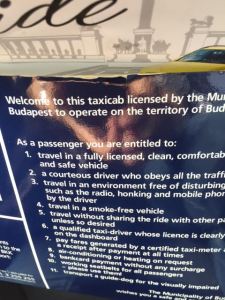 Taxi services are so widespread and common it seems that the taxi industry should have itself figured out and under control. Obviously, this isn’t the case. Sure, new startup companies like Über and Lyft are starting to innovate and revolutionize the marketplace, but traditional taxi providers are still extremely relevant and act as such.

The difference between taxis in Budapest and New York City is dramatic. New York City’s taxis are driven by (excuse the generalizations) frustrated, often unfriendly people. There are few dress requirements – it’s always a surprise. The taxi experience in New York is different every time one steps foot in a taxi. Sometimes there’s music, sometimes there’s a fresh scent, sometimes the seats are comfortable. This gives traditional companies a bad image. Nothing is standardized so they are being replaced by companies that are successfully standardizing a difficult to standardize industry. Consumers want what they expect – nothing less.

Budapest taxis are much better standardized. Every time you step into one of these taxis, the cars smell good, drivers are well dressed, and are polite. Even further, they understand English enough to professionally communicate with western tourists. 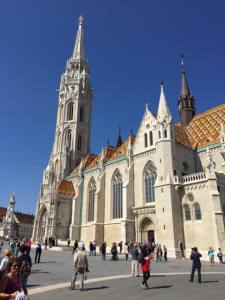 As you step into a taxi in Budapest, you will be greeted and asked if you would like to listen to music. If you don’t want to listen, they won’t make you listen the music they like. As a passenger you are entitled to travel in an environment free of disturbing such as the radio, honking, and mobile phone by the driver.

Perhaps this is why these standardized companies like Über and Lyft have had less success integrating into Budapest than they did integrating into New York City. Budapest’s taxi experience is far superior to that of New York’s.

What has is your most favorite taxi experience? Tell us on Twitter @nycimageacademy.